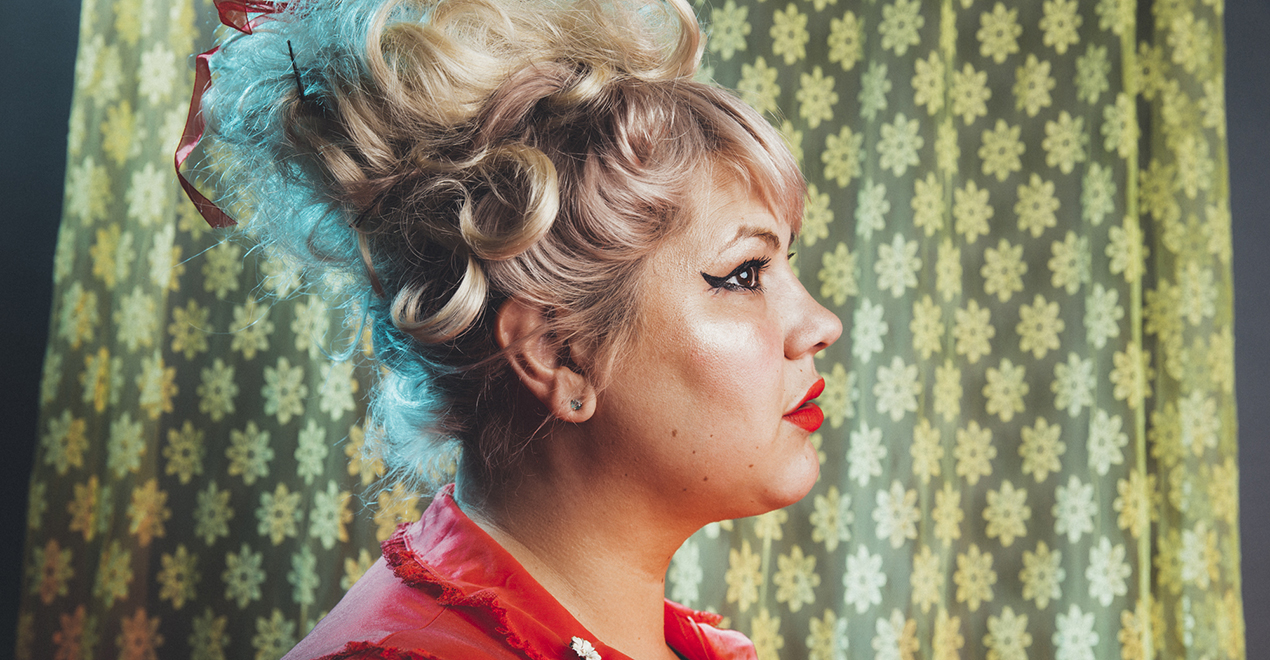 Shannon Shaw, the captivating vocalist, bassist, and founder of Shannon & the Clams, valiantly strikes out on her own, gracing us with her first solo album, Shannon In Nashville. In a nod to Dusty Springfield’s 1969 classic Dusty In Memphis, Shaw made her own pilgrimage down South to collaborate with The Black Keys’ Dan Auerbach and a congregation of revered old-school session musicians which have played on notable records by Elvis, Willie Nelson, John Prine, Herbie Mann, Aretha Franklin, and Johnny Cash, to name just a few.

It started when Auerbach, who discovered Shannon and the Clams after hearing them at a local record shop, recommended the band to an Australian tour promoter. Shaw wrote to thank him and they met in person at the historic Fillmore in San Francisco and formed an immediate artistic rapport. The two hit it off, and within days Auerbach invited her down to Nashville to record a solo record.

Understandably, the process of making Shannon In Nashville pushed Shaw into unknown territory, which could be intimidating at times. She struggled to overcome the withering confidence and feelings of not deserving to be there—imposter syndrome, essentially. Shaw had never done session writing or worked exclusively in a group of older, male, professional musicians who produce music for a living. “Writing music is so vulnerable and emotional for me. They wanted me to just jump in on the spot like double Dutch. It felt like I was taking my clothes off.” She came in expecting to be treated subconsciously like “the girl,” an interloper in a predominately male music industry. However, the studio musicians’ down-to-earth warmth, humility and encouragement made Shaw feel like a peer and reminded her that they were all there working together in service of her vision for the album. The album’s title is meant to acknowledge her collaboration with these Music City greats. Shaw initially brought six songs to the table, and the rest were written from scratch on group songwriting days. It was an exercise in self-esteem and speaking up for what she wanted. “Can you imagine telling Bobby Wood, Elvis’s piano player, that you don’t like what he’s doing?”

Shaw admits that she initially had a hard time wrapping her head around that notion of recording a solo album and didn’t have the means to do such a thing. Her fiercely independent mother insisted she go though, and threatened she’d sell her car to purchase a plane ticket. Not wanting to disappoint her mother, or make her sell the car, Shaw wrote Auerbach that she wasn’t so sure about the prospect and that she could, at best, only afford the plane ticket there (which she was able to do without her mother selling the car). Auerbach responded, “Just show up and we’ll make it happen. It’ll be awesome.” And it was. Evoking the tear-jerking intonations of Brenda Lee and Patsy Cline, Shaw’s mastery of the instrument she was born to use leaves no doubt that she belongs squarely on the throne of whatever she cares to belt out.

On Shannon in Nashville, Auerbach shines as a producer and possesses a keen eye for talent. He’s lovingly scooped up this diamond in the rough from the punk world for his own recording studio and record label, Easy Eye Sound. The record’s lush orchestration seamlessly melds the Nashville Sound with the Motown Sound—both known for crossing a type of roots music over into pop—and provides the wings for Shaw’s naturally anguished, torchy voice to soar. The all-star lineup comprises drummer Gene Chrisman and Bobby Wood (keys and percussion) of the Memphis Boys, American Sound Studio’s house band that breathed life into hits by Elvis, Neil Diamond, Herbie Mann, and, yes, Dusty Springfield. Rounded out by bassist Dave Roe, guitarists Russ Pahl, Auerbach and others, Shaw’s session crew boasts a mile-long resume.

Shaw truly arrives in Nashville sounding like a woman who has learned to embrace who she is and where she came from. The daughter of a fire-fighting father and a mother who worked nearly half of her life as a nurse at Napa State (the mental institution which famously hosted a 1978 Cramps show), Shaw grew up out in the country, avoiding jocks and cops who had nothing better to do than harass local misfits. In high school, Shaw got a bass guitar, the glittery Danelectro she still plays today, as a gift from a boyfriend. Not able to envision herself as a “real” musician at the time, Shaw didn’t actually start playing her bass until about ten years later in response to a particularly rough break up that left her alone in the East Bay and desperate for an outlet. She has since become an expert at examining the detritus of love gone wrong with vocal stylings rivaling the ’60s girl groups and Dion getting his teeth kicked out.

In the laidback, road trippy song, “Leather, Metal, Steel,” Shaw waxes nostalgic for those rural roots in hopes of resuscitating a heart that’s slowly numbing to the mercilessly carved up landscape of gentrification. Leather, metal and steel also represent a vehicle of comfort and liberation. “For me my car has always been my safe place. I grew up with only my brothers to hang out with, stuck way far out where you couldn’t walk to anything but a creek.” It’s inside a car where Shaw writes all of her songs and can be the most vulnerable. “The way I typically write songs is: Something has happened to me and I want to encapsulate it. I want to trap and package it, so I can pull it out of my body, and look at it to get some perspective on this event that has affected me,” says Shaw of the catharsis inherent in her song-writing process.

Raised in the Mormon church, Shaw began challenging authority when the church shunned her mother for divorcing her father and tried to manipulate the kids into reuniting their parents, à la The Parent Trap. Her father never quite recovered from the split, which Shaw addresses lovingly in the plaintive yet hopeful “Cryin’ My Eyes Out.”

Shannon In Nashville exudes a self-possessed melancholy that sets the scene for Shaw to comb through a personal history of love lost to time, circumstance, fear or neglect. “I Might Consider” reigns as the most hauntingly beautiful rendition of this recurring theme as it retraces the fading lines of who-did-what-to-who in hopes of a truce. Lyrically reminiscent of Dolly Parton and Porter Wagoner’s heart-breaking duet, “Just Someone I Used to Know,”Shannon In Nashville‘s kick off song, “Golden Frames,” illustrates the dilemma of dealing with love’s artifacts that torturously outlive the relationship from whence they came.

After coming out on the other side of heartbreak, Shaw grapples with the guilt of breaking someone else’s heart when the tables are turned in “Cold Pillows” and the Amy Winehouse-esque “Broke My Own.” She empathizes with the pain of the dumped to an extent rarely seen in the person ending the relationship. “Love I Can’t Explain” speaks more to Shaw’s self-preservationist tendency to hit the eject button as soon as she catches a whiff of rejection. “Freddies ‘n’ Teddies” further reinforces the need for dignity maintenance when putting yourself back out there on the dating scene.

Ultimately, the bittersweet ballads of Shannon In Nashville uphold the elation of love while mourning its loss. Shaw embraces the bravery of daring to love, reminding us that even heartbreak can be a life-affirming, self-teachable moment. On the album Shaw makes a case to stick around and brave the heat. Bring it on, pile it high, and if need be, tear it down, and start over.

ALL NEWS FOR: Shannon Shaw