The new album by the uncanny Mississippi bluesman and produced by Dan Auerbach is out via Easy Eye Sound on October 18th. 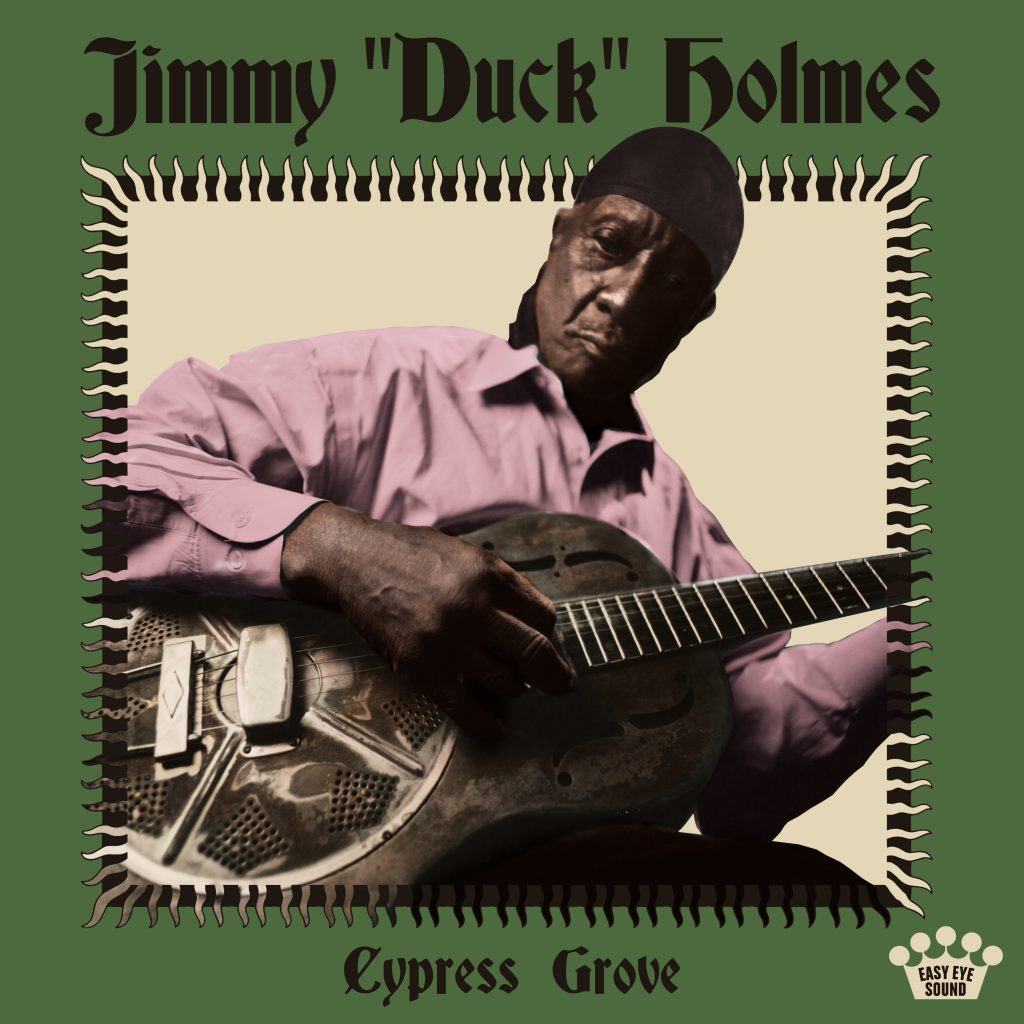 Jimmy “Duck” Holmes wants you to visit his juke joint in Bentonia, Mississippi. Consider his new album, the 11-song Cypress Grove, your invitation.

Produced by Dan Auerbach of the Black Keys for his Easy Eye Sound label and available on October 18, Cypress Grove is an aural postcard of a typical Saturday night at Holmes’ Blue Front Café, America’s longest operating juke joint. The album is anchored by tradition — which is natural, since Holmes is the last of the original torchbearers of the rural style known as Bentonia blues—but it’s also explosive, raw, and unpredictably in the moment.

Saturdays are the night when the musical heat gets turned up at the Blue Front, which Holmes’ mother and father, who were sharecroppers, established in 1948. Holmes opens the club at 7 a.m. every day. On weekends, he typically kicks evenings off singing and playing solo on acoustic or electric guitar, maybe breathing life into a Bentonia classic nearly a hundred years old, like “Cypress Grove,” and then, as the night continues, he’s joined, often spontaneously, by other musicians — until suddenly there’s a band and the walls start to vibrate with sound.

It’s that sound and experience that Auerbach captured when he invited Holmes up to his Easy Eye Sound Studio in Nashville for a few days to record Cypress Grove. And like a Saturday at the Blue Front, Holmes was joined at Easy Eye by a coterie of players. But instead of the luck-of-the-draw group of local musicians and visitors who usually support Holmes at his club, Auerbach handpicked inventive, attuned artists to carry the 72-year-old bluesman to high ground.

“I like to work with people who inspire me, and Jimmy inspires me,” Auerbach explains. “Jimmy’s music is rough and tumble, and it can shatter a lot of preconceptions purists have about Delta blues. At the Blue Front, you never know who’s going to show up, or what instrument they’ll be playing. There could be three guitars, bass, drums, mandolin, and fiddle one weekend, and then the next weekend a banjo player or a saxophonist shows up. So the sound always reflects the ages and experiences and styles of the musicians who are there, and that keeps it fresh, modern, and totally unpredictable.”

Auerbach’s diverse cast nailed the Blue Front vibe perfectly. He invited drummer Sam Bacco, who holds the principal percussion chair in the Nashville Symphony and has a long resume of rock, country, pop, and bluegrass sessions, along with Mississippi’s Eric Deaton, the definitive master of modern Delta and Hill Country blues bass. Auerbach also drafted rising roots and rock guitar hero Marcus King to join himself and Holmes on six-string. That lit the fuse, Holmes’ repertoire and granite-steady riffs provided the gas, and Cypress Grove is the conflagrant result.

The album starts with Holmes singing and playing alone, offering his variation on “Hard Times” — a song Bentonia’s most famous bluesman, Skip James, recorded in 1931 as “Hard Time Killing Floor Blues” — in a trance-inducing open D-minor tuning long associated with his hometown. Next up is “Cypress Grove,” and the transportation begins. As Holmes sings, “I’d rather be dead, dead in some old cypress grove,” in his Delta-dust-dappled voice, the music echoes the blues’ African roots, thanks to Holmes’ hypnotic riff and Bacco’s hand-drum-like pulse. Auerbach extends the arrangement’s geography further, using an electric guitar and a wah-wah pedal to create a feedback drone similar to an Indian tanpura. Although Holmes drives “Catfish Blues” — really, he’s the backbone of every song on the album — Auerbach’s stabbing accents and fat, fuzz-toned solo bring a visceral edge to this Delta-born theme often associated with both Muddy Waters and Jimi Hendrix. On “Rock Me” and “All Night Long,” King adds singing, hot-butter slide guitar, richly shading the groove. And Auerbach and saxist Leon Michels expand “Little Red Rooster” with a unison countermelody that blooms into a sonorous finale. Another highlight is “Train Train,” in which Holmes and Bacco create a deep, percolating rhythm — aptly train-like — while Auerbach adds a wide palette of colors, playing warm single-note melodies, train-whistle sounds, and harmonized guitar lines. It’s a beautiful mesh that captures the spacious mystery of the flat, open Delta nightscape, where sounds like a rolling freight can carry for miles over the cottonfields and beneath the star-spackled skies. It is among the album’s many timeless listening experiences, and likely to be recreated when Holmes tours with the Black Keys later this year.

“I didn’t know who Dan Auerbach or the Black Keys were when my manager told me Dan wanted to make an album with me,” Holmes explains. “But when we started to play, I knew after a couple songs that him and those other fellas were passionate about it. And that’s what you need to play this music. It’s about passion. It’s not about dollars. You don’t make no money playing the real blues. There ain’t none it in.”

Auerbach points out that Holmes has recorded many of these tunes on his eight previous albums, “but they’re never played exactly the same way on any of those recordings, and certainly not on the ones we recorded together. The settings are all different, but the real difference is Jimmy, who believes in making up new verses and maybe changing a riff or a section — really being spontaneous to keep this music exciting. He’s a true interpreter of these songs.”

Holmes takes great pride in his role as the pre-eminent custodian of the Bentonia blues style and repertoire, as well as his inclination to improvise. “This music was made up by old guys who couldn’t read or write, so they kept all they lyrics and chords up in their heads,” he says. “I’ve tried to keep as much of what they passed to me as best as I could. But I don’t want to play like Skip James or Henry Stuckey.” The latter, along with his brother Dodd Stuckey and Jack Owens, were Holmes’ mentors in the style, which is marked by open tunings and a resulting haunting and lonesome Delta sound. Holmes continues: “Another thing that people should remember is that this music is not about being rehearsed. These guys would work in the field long, hard days and be so tired all they could do is have some food and then maybe go to a craps game and get drunk. You don’t got no time for rehearsal. You gotta go with the flow.”

That easy-going attitude has made Holmes a favorite personality among lovers of the Delta blues he was seemingly born into on July 28, 1947, a year before his parents opened the Blue Front. He took over the Café in 1970 and, except for when he’s been on tour or sick, has run it seven days a week for the ensuring 47 years. Also in ’72, Holmes and his mother, Mary, started the Bentonia Blues Festival, which he still hosts every June on his family’s farm, near the club. Over the decades, Holmes has traveled the world with his guitar — always an acoustic or a hollowbody electric, to “get the correct sound.” But when he’s home, visitors to the Delta can rely on his presence at the Blue Front — which has a published phone number — or at small festivals in the region, like his own or Clarksdale’s Juke Joint and Deep Blues festivals.

“I want to play this music as much as I can, because I want younger people to see it and get the passion for it and carry it on,” Holmes declares. “It’s important. It’s blues, so it’s the foundation all American music was built on. And it’s the truth — all true stories about real life, ’cause country blues got no room for lies. I thank God for being blessed enough to be able to have the opportunity to create music that stays true to those old guys who taught me, and that people appreciate it. I’ve never cared for being famous or wealthy. But as long as I live, I’m gonna be on a stage somewhere, singing the old-style country blues.”

ALL NEWS FOR: Jimmy "Duck" Holmes
×