“Shaw’s voice is in a different universe…” —Noisey

“With this double whammy of albums, Shaw’s star is certain to ascend dramatically in 2018.” —Mojo 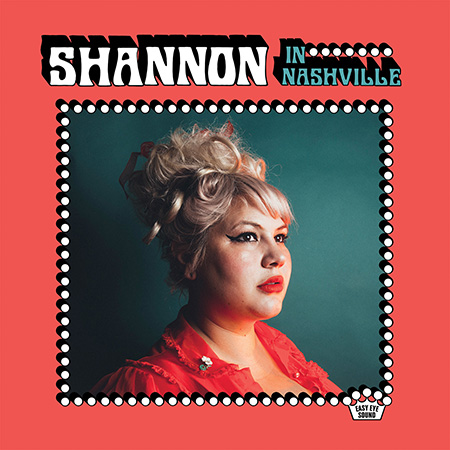 On June 8th, Shannon Shaw, the captivating vocalist, bassist, and founder of Shannon & the Clams, will strike out on her own for her first solo album, Shannon In Nashville. Produced by The Black Keys’ Dan Auerbach at his Nashville studio, Easy Eye Sound, the album features a cast of revered old-school session musicians which have breathed life into notable records by Elvis Presley, Aretha Franklin, Willie Nelson, and John Prine, to name just a few. The album evokes the tear-jerking intonations of Brenda Lee and Patsy Cline and exudes a self-possessed melancholy that sets the scene for Shaw to comb through a personal history of love lost to time, circumstance, fear or neglect. “The way I typically write songs is: Something has happened to me and I want to encapsulate it. I want to trap and package it, so I can pull it out of my body, and look at it to get some perspective on this event that has affected me,” says Shaw of the catharsis inherent in her song-writing process. Shannon In Nashville is available for pre-order here.

This morning, Shaw debuted her new music video for the first single off her forthcoming album, “Broke My Own,” via Billboard, which says: “Shannon in Nashville is cinematic, like something from a James Bond film, summertime-like, and ’60s inspired, but Shaw offers a fresh new take.” Watch the video here:

Shannon In Nashville‘s title is a nod to Dusty Springfield’s 1969 classic Dusty In Memphis, and Shaw made her own pilgrimage down South to collaborate with Dan Auerbach and his all-star house band comprised of drummer Gene Chrisman and Bobby Wood (keys and percussion) of the Memphis Boys, American Sound Studio’s house band that recorded hits by Elvis, Aretha, Neil Diamond, Herbie Mann, and, yes, Dusty Springfield. Rounded out by bassist Dave Roe, guitarists Russ Pahl, Auerbach and others, Shaw’s session crew boasts a mile-long resume. Shaw initially brought six songs to the table, and the rest were written from scratch on group songwriting days. The resulting record’s lush orchestration seamlessly melds the Nashville Sound with the Motown Sound—both known for crossing a type of roots music over into pop—and provides the wings for Shaw’s songwriting prowess and naturally anguished, torchy voice to soar.

Understandably, the process of making Shannon In Nashvillepushed Shaw into unknown territory, which could be intimidating at times. She struggled to overcome her own self-consciousness and feelings of not deserving to be there—imposter syndrome, essentially. Shaw had never done session writing or worked exclusively in a group of older, male, professional musicians, and came in expecting to be treated subconsciously like “the girl,” an interloper in a predominately male music industry. It was an exercise in self-esteem and speaking up for what she wanted. “Can you imagine telling Bobby Wood, Elvis’s piano player, that you don’t like what he’s doing?” However, the studio musicians’ down-to-earth warmth, humility and encouragement made Shaw feel like a peer and reminded her that they were all there working together in service of her vision for the album. Her fears were unfounded, she soon realized, and her mastery of the instrument she was born to use, her voice, leaves no doubt that she belongs squarely on the throne of whatever she cares to belt out.

Shaw truly arrives in Nashville sounding like a woman who has learned to embrace who she is and where she came from. The daughter of a fire-fighting father and a mother who worked nearly half of her life as a nurse at Napa State (the mental institution which famously hosted a 1978 Cramps show), Shaw grew up out in the country, avoiding jocks and cops who had nothing better to do than harass local misfits. In high school, Shaw got a bass guitar, the glittery Danelectro she still plays today, as a gift from a boyfriend. Not able to envision herself as a “real” musician at the time, Shaw didn’t actually start playing her bass and writing music until about ten years later in response to a particularly rough break up that left her alone in the East Bay and desperate for an outlet. She has since become an expert at examining the detritus of love gone wrong with vocal stylings rivaling the ’60s girl groups and Dion getting his teeth kicked out.

Shannon In Nashville‘s kick off song, “Golden Frames,” illustrates the dilemma of dealing with love’s artifacts that torturously outlive the relationship from whence they came. “Love I Can’t Explain” speaks more to Shaw’s self-preservationist tendency to hit the eject button as soon as she catches a whiff of rejection. “Freddies ‘n Teddies” further reinforces the need for dignity maintenance when putting yourself back out there on the dating scene. On “Cold Pillows” and the Amy Winehouse-esque “Broke My Own,” she empathizes with the pain of the dumped to an extent rarely seen in the person ending the relationship.

Ultimately, the bittersweet ballads of Shannon In Nashville uphold the elation of love while mourning its loss. Shaw embraces the bravery of daring to love, reminding us that even heartbreak can be a life-affirming, self-teaching moment. On the album, Shaw makes a case to stick around and brave the heat and potential heartbreak. Bring it on, pile it high, and if need be, tear it down, and start over.

ALL NEWS FOR: Shannon Shaw
×