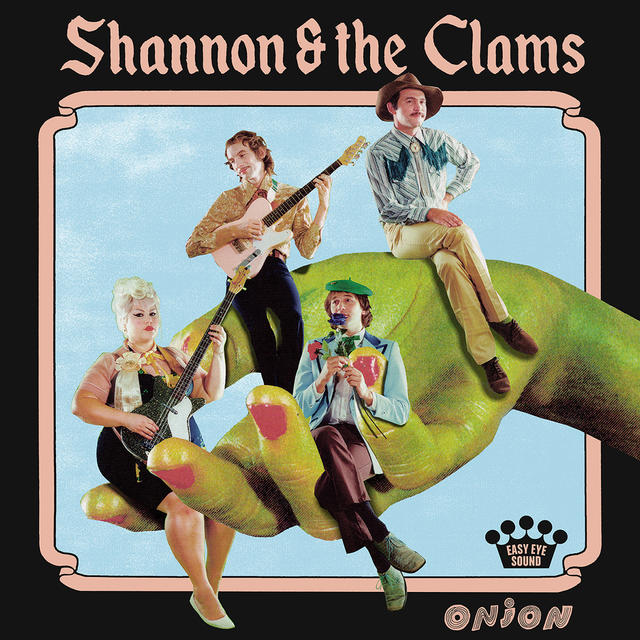 Shannon & the Clams’ fifth studio album, Onion, is out now via Easy Eye Sound. The album, produced by The Black Keys front man Dan Auerbach at his Nashville studio, finds a finely tuned and tour-tested band stretching out from the 60s-inspired, surf inflected rock that has defined their previous releases, and delving into genres including soul and psychedelic pop. On their new LP, the band explores themes of origin and self-determination, loss and recovery, and the power of community to heal after tragedy. “It’s okay for people to interpret the songs,” Shannon Shaw says. “You can put your own story into it if that helps you heal. I just want people to feel something, whatever it is.”

Shannon & the Clams recorded Onion over ten days in early 2017 at Dan Auerbach’s Easy Eye Sound Studio in Nashville, where he helped refine and embellish the songs and steer the album. “He works in this very layered style,” Cody says. “He has all these instruments in the studio mic’d up at all times, ready to go. You can go back and add all these layers of instruments really fast and then cut stuff away in the mix.” With Shannon and Cody focused on pinning down the songs and tracking vocals, Nate and Will dug into the studio’s wealth of instruments, tapping into their own years of songwriting and multi-instrumental experience to ornament and color the tracks, which lead to the band’s most nuanced and layered album to date.

The themes of origin and introspection are central to Onion, and each song wrestles with the idea of identity, and identity’s origin as a collection of experiences. “I had this epiphany that was likening an onion to being human and how you’re nothing without layers of experience,” Shannon says, “Every time you think you’ve figured something out there’s just another layer beneath it. Each song on this album is about problem solving and having realizations about yourself.” Album opener “The Boy” is quintessential Clams. Written by Cody, the track speaks about the way childhood experiences stick with and shape you, for better or worse, and hang around forever like baggage until you choose to lose them. “It’s Gonna Go Away,” written by Shannon, is the album’s biggest stylistic departure and muses on the notion that all in life is temporary, the good and the bad, and finding comfort in that.

Shannon & the Clams had already begun writing for the Onion sessions in the fall of 2016, when their world was rattled by the Oakland Ghost Ship warehouse fire in early December. In the wake of the fire, the band looked back at their origins in the Oakland underground and the importance of that world to their genesis. They could recognize the community as a delicate incubator for fringe art, and an unstable but nurturing place for performers to practice and cross-pollinate where there otherwise is no platform. The song “Backstreets” is Cody’s response to the Ghost Ship fire, and particularly the issues of artist housing and being forced to make your own way in a society that is not arranged to accommodate artists. Album closer “Don’t Close Your Eyes” is Shannon’s response, an inspirational ballad urging those suffering through loss to not give up in the midst of tragedy.

Over the last decade, Shannon and her chief collaborator guitarist Cody Blanchard have released four albums of 60s-inspired pop on indie labels, toured tirelessly and have gradually solidified a lineup of devoted Bay Area musicians. In this current iteration, Shannon & the Clams, consisting of Shannon Shaw on bass and vocals, Cody Blanchard on guitar and vocals, Nate Mahan on drums, and Will Sprott on keyboards, have developed notoriety for lively and genuine stage performances and a zealous following that craves their particular authenticity and innovation on classic sounds.

ALL NEWS FOR: Shannon And The Clams
×