“a Bristol-based singer-songwriter with a voice that can range from confessional coo one moment, to full-on heart-wrenching howl the next” —Rolling Stone 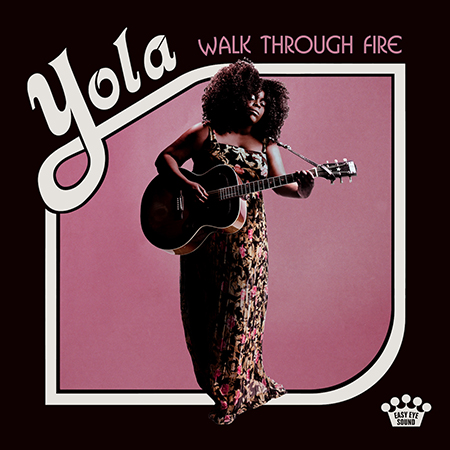 British rising star Yola’s debut solo album, Walk Through Fire, produced by The Black Keys’ eight-time Grammy Award winner Dan Auerbach, will be released on February 22, 2019 on Easy Eye Sound. Yola has blazed her own trail with an unshakable passion for the soul and country music she loves.

Walk Through Fire is a contemporary twist on a traditional sonic tapestry of orchestral strings, fiddle, steel and shimmering tremolo guitars, it provides the perfect soundtrack to Yola’s arresting vocals, which first came to the attention of Auerbach after a friend sent him a video of Yola performing in Nashville.

Dan Auerbach stated, “The moment I met Yola I was impressed. Her spirit fills the room, just like her voice … she has the ability to sing in a full roar or barely a whisper and that is a true gift. She made everyone in the studio an instant believer.”

Yola’s video for her debut song “Ride Out In The Country,” the first taste of the forthcoming record, was premiered by Rolling Stone Country, which described the video as “a perfect complement to her dusky, soulful vocals and the song’s dreamy melody.” The cinematic video, directed by Reid Long and Kip Kubin, is the perfect visual for Yola’s heartfelt vocals, which paint pictures of long thoughtful summer drives, escaping into the scenery around her, away from the painful memories of past love lost. Watch the video here:

Yola stated, “Lyrically the song is about escapism and the video adds an awesome twist. We wrote the song about getting away from an oppressive environment. I was in an abusive relationship a while back, so I drew on the feeling of relief and release that I had when I truly felt free.”

Hailing from a small town outside Bristol in the UK, Yola grew up in poverty with an unsupportive parent who “banned” her from making any music. She later became homeless, living on the streets of London and also experienced stress-induced voice loss.

Yola overcame these challenges to launch a successful sideline in writing, performing on pop hits and briefly joined British band Massive Attack. She was also the main writer and front woman in Phantom Limb, opening for artists including James Brown and Dr. John before pursuing her solo career in 2016. She quickly made her mark in the US with her vocal powers and innovative songwriting winning early supporters, including Rolling Stone Country, the Wall Street Journal, Paste, Stereogum, NPR and The Current’s Bill DeVille who stated, “She’s a powerhouse of a singer: she’s part Southern soul, she’s part gospel and she’s completely amazing. You’ll want to remember her name: Yola.”

Written and recorded at Auerbach’s Nashville studio, Easy Eye Sound, Walk Through Fire is a truly collaborative record. It was written in the studio by Yola and Auerbach with contributions from songwriting legends who between them have written songs for artists from Glen Campbell to Aretha Franklin. Auerbach also assembled his Easy Eye Sound all-star house band composed of legendary session players. Musicians who performed on the record include bassist Dave Roe (Johnny Cash) as well as drummer Gene Chrisman and pianist Bobby Wood who played on hits by Dusty Springfield and Elvis Presley. Guest performers include up-and-comer Molly Tuttle and country music icon Vince Gill.

ALL NEWS FOR: Yola
×